It’s going to be a long day, and I didn’t get much sleep last night. Contemplating the dawn of a new day, it occurred to me to jot down how much I have appreciated this week.

Got to get back in touch with my beloved mentors at Lewis University, Romeoville, Illinois the other day. They emailed back and Oh, it was such a blessing! I’m still plowing through the hurdles a new writer must leap over. Nuggets for new stories are coming so fast that I think that I have to get my voice recorder back into service.  Or I could just buy the Dragon program and save myself a bad case of carpel tunnel syndrome up the road. I never got into a Girl Scout Troop, so I still have problems with ‘being prepared’.

Coffee mug in hand I’m out the door to embrace the day!

Scars: Discover had this single-word prompt recommended for daily writing exercise. Who does not have some kind of mark (internal & external) that effects what you think, feel and respond to th…

Scars: Discover had this single-word prompt recommended for daily writing exercise. Who does not have some kind of mark (internal & external) that effects what you think, feel and respond to the world(s) we inhabit??

What do mine look like? The oldest scar that still effects me is having my family separated and my brothers and sisters placed by Catholic Charities into fosterage. That occurrence amounted to a psychological split.  My youngest sister spoke of ‘her Mom’ when we were finally reunited years later.  There were ten children: the five oldest raised one way and the five youngest another. We don’t and can’t perfectly recall the entire family’s trauma, but we share that same scar. Each sees that time in their own way. Some of us are not as close as others, but that is a legacy of that time, too.

One thing that I am grateful for: we may not agree with each others’ lifestyles but we care and love each other.  That is why no matter how long between face-to-face visits may be, it seems like only ‘the other day’ since we were together.

Just as a frame of reference for how long a ‘scar’ can impact a person, this all happened in the summer of 1965.  I was just seventeen years old.

Thanks for stopping by!! Sue O’Neill 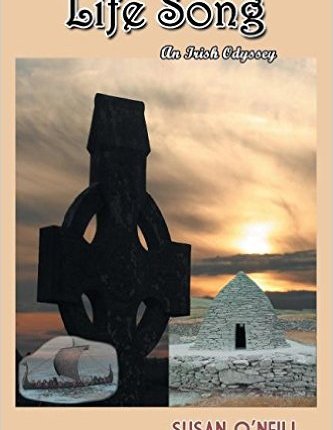 My first post was my author picture.  Maybe it just looked like I was categorizing the photo as a historical artifact. If that was the perception, it’s understandable.  There’s some truth to such an inference.

When I created Lifesong, it was truly a labor of love. Some of the present audience have liked Owyn’s story and understood what it was about.  When an ordinary person undertakes a journey, except for arriving at the hoped-for destination and outcome, most of the trip is accomplished without maps or huge stores of information prepared beforehand.  However, with the exception of military and intelligence communities, this is NOT the experience of most of us. How did people accomplish the extraordinary events of life.  Just like you and I, it begins with waking up, getting nourishment and just putting one foot in front of the other.

You can find this story at http://sbprabooks.com/susanoneill

It is available through Amazon, Barnes and Noble, as well as Books-A-Million.

How’s life treating you today?  So far, I’m getting into my day and have 1 1/2 mugs of coffee circulating in my system.  At the moment I am laboring under the delusion that this is visible to other wordpress users.  Did you ever hear the word ‘neophyte’?  If my command of the English language is intact, I do believe that this word describes me well in the world of blogging.

As a debut author, time and time again it has been emphasized that I need to build an E-presence.  My progress in that is a nervous journey.  You know what it means when you liken it to learning to drive a stick-shift car.  The WWW superhighway is kind of TOUGH when you have barely learned to manage the gears!  So I counsel myself with ‘Stay the course’ and ‘Heck, I’m a life-long learner’.  Plug-ins, WPDashboard, and all, look out:  I’m in here, playing with stuff.  To me,  this is just the same as my first use of the interstate highway system.  OOOH NOOO – I’m taking my life in my hands, and wondering if I will have a heart attack before I get off the next exit!!

As I type I glance hopefully at my copy of WordPress For Dummies, much as I would Better Homes and Gardens’ cookbook. With the understanding that once a cook has mastered a recipe, this same cook will find the courage to modify and experiment with new ingredients later on. After all, I AM a glass-half-full kinda girl. 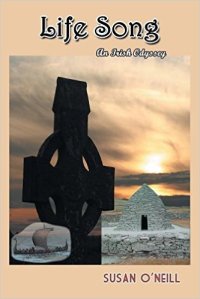 It is so exciting to become a published author (at last!!)

Life Song: An Irish Odyssey is the result of nearly six years’ research, and multiple rewrites. I chose the pen name of Susan O’Neill to honor my parents. Becoming a member of the Gulf Coast Writers Association is an especially exciting experience, too. Acting on the maxim that it’s never too late (to do anything, really, as long as we’re still breathing) I feel more alive than ever. Sounds weird except this is coming from a ‘junior Senior’ citizen. Writing and storytelling have been a part of the fabric of my life.

As the oldest sibling in a large family, one of my favorite activities at the close of the day was to gather my brothers and sisters around me and tell bedtime stories. We loved Grimm Brothers, Hans Christian Anderson and an obscure book of tales entitled The Mermaid and the Simpleton.

especially stormy night in our Chicago area town, my six sisters and three brothers all wanted to stay with me in my room. As the first-born I rated a room of my own. Although I had a full sized bed, we were a bit cramped for accommodation. So, being the inventive little Irish kid that I was, I made a sort of Pullman bed for the little ones from my antique dresser. I took out the small drawers and used them as supports for the four-foot long lower drawers, staggering them like steps, stuffing blankets in for mattresses, covered them with flat sheets tucked over them, and arranging the smallest children in opposite ends of each of the “beds” and tucking the four little ones in for a comfy night of storytelling. We continued to do that every so often. Believe it or not that 19th century dresser with the swinging mirror held up beautifully!

Anyway, the important thing to me is storytelling. All people have their favorite brand of storytelling. Every art that human beings love is a form of telling tales: paintings, poems, songs, dances, sculpture, films, t.v. and yes, books, do that for us. Mine happens to be in the Irish bardic tradition, simply telling any interesting tale to anyone who happens to want to be the audience. It probably is at the heart of why I have chosen to become an author. The other day I happened to be reading a magazine in the doctor’s office and there was a cartoon entitled “The First Art Gallery.” Cave people were strolling around a spacious cavern in little groups admiring the most recent wall coverings. You have to love it. I did!

What kind of stories do YOU like most?? Almost all of us are capable of telling a tale. When we are young we have a tendency to make up extravagant tales in defense of some infraction of parental rule; some of them are classic! One of the children in my family explained to her second-grade teacher that her make-up homework assignments were not turned in because I had died! Imagine the puzzled look on the woman’s face when I pulled to the curb to pick up her up? Or the time she sold our neighbor a can of tuna because “Mommy needs the money.” She had overheard her mother on the telephone trying to make payment arrangements with some creditor. Boys are good at this game as well. My son, then 9 years old, offered an interesting explanation for his presence on the roof of our home: having just watched “The Boy Who Could Fly”, he told me with deep sincerity “Mom, I know I can do it!” Being a dutiful parent, I stated my case for why I preferred he not act on the belief. As a parent or an offspring of one, we all can appreciate such anecdotes. That’s storytelling! 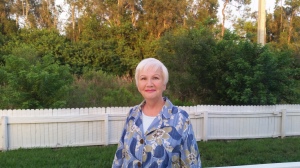