Bet you thought that I gave up on the blogging thing! Nope, just that I’ve been dealing with health issues, which have nearly resolved -Thank Heaven!!! Just learned that I have some ‘royalties’ coming from my ebook version of Life Song. (Hope that it will prove more impressive than the check I just got from Medicare for .08. Hey, General Services Administration: can’t you just carry ridiculous amounts as a credit??  Just my opinion, it costs us more to fool around like that.)

All of the above notwithstanding, my brain has begun to function again. So, I’m working on the sequel to my book. I got to look up lots of interesting things. For instance, medical training has been available in Ireland since about the time of Christ, concurrent with the developments in healing in Egypt, Judea, Greece. Aside from that, all of these medical traditions were saved for the world by the Arab scholars. The monks in European monasteries copied these works and they made their way to Ireland where those same medical traditions were recast into the then-known world. Love this stuff!!!

Then, too, I have reviewed all of my posts to date and wanted you to know that I am not a modern day ‘banshee’ bewailing the hard aspects of life. I have a weird sense of humor but really do love people and life in general. Thought that I would share an excerpt from one of my short stories so you could see what I mean.

I:  The Ducks      They lined up this morning, milling around in guarded expectation.  There were several species of duck present:  Muscovies with white heads, yellow beaks and red mottling that looked like modeling clay tacked into place by a playful Creator.  Mallards displayed lovely earth tones with patches of soft yellow peeking out on lower spots on their wings.  The “tall guys” had mostly shiny black plumage with lovely iridescent green on their wing tips and more of the same shiny green in bands around their necks. As a Caregiver, I come in to get Harry his meals; do light housekeeping and other care as needed.  Among other things, I also assist Harry, our client, with feeding his local birds. Harry is a very special, loving person.  He loves his family and he cares for his avian friends.  Every week, if there isn’t enough bird seed in the bin that he stores on the enclosed patio, that item appeared on his weekly shopping list. 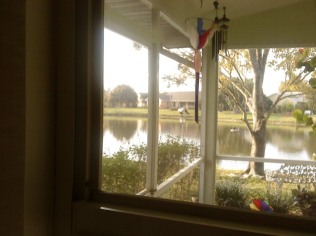 We live in Southwest Florida, in Fort Myers.  Harry’s home lies in a community where each cluster of homes has a little pond with an aerator at its center.  This aerator also serves the ducks as a diving platform.  It is really fun to watch them in action as two or three at a time land and get set to dive back into the water.  Observing the various species as they come to patronize Harry’s Avian Café, it is apparent how generally well-fed these feathered neighbors are.  Did you ever notice how nomad animals that neighborhoods share are often Anything but scrawny??

I am more familiar with the habits of cats.  It’s been my experience to “adopt” a stray, only to have it disappear for days at a time and show up again.  One thing about nomad cats I’ve known:  they never seem the worse for wear for having been out of my care for varying periods.  Apparently, the same holds true for Floridian ducks.  Harry’s “buddies” would make Daniel Boone’s mouth water at the prospect of bagging any one of them.  However, in 21st century America, ecologists frown on human hunting, so poor ole’ Dan’l would probably face a citation and/or fine for his normal pursuits from the local authorities.

This morning, Harry’s Avian Café opened to a brisk trade.  Several of the black and green variety and a couple of Muscovies lined up expectantly by the lanai (Florida’s name for a screened porch) door.  They backed off a foot or so as I went out to get their orders from the seed bin.  As I spread the seed on the ground for them, they moved into a semi-circular lineup, flipping their tail feathers in a happy, if guarded fashion.  “Ok, here you go.  Enjoy!” I called to them as I retreated back into the house to look after their benefactor.  All in all, we had a brisk trade that morning.  I counted nineteen customers and informed Harry.  He just smiled and said “Very good” as he enjoyed his own breakfast.

Harry loves the little creatures of this Earth.  Watching them and moving among them fills him with peace and contentment.  He can tell you what species are for the most part.  If you ask him about nearly anything, chances are he has a good store of knowledge to draw from and can provide you with a pretty good answer.  As any good restaurateur, Harry reserves the right to refuse service to anyone.  The neighborhood squirrels he perceives as unwelcome diners.  He is not the only person who sees them that way.

One afternoon earlier in the summer of 2013, I discovered that Harry had been diligently studying this problem.  He directed me into the garage and indicated a small saw and bid me follow him out to the backyard.  The object of the quest was a long branch of the slender tree opposite the bird feeder.  I studied the base of the branch, made an appropriate notch on the base and with several strokes of the blade, severed it cleanly.  Then, Harry instructed me in cutting it into thirds for the yard waste pickup.  Hopefully, the intent was to deprive the pesky rodents from launching themselves onto the bird feeder.  They would have to content themselves with the ducks’ leftovers (if any). These furry café patrons had other ideas, however. No matter what we did to foil their incursions, the squirrels continued to demand and obtain a portion of Harry’s choice cuisine.  After a time the shield installed on the bird feeder was gradually pounded down from the base of the bird feeder to the ground.They could be seen munching contentedly away alongside the ducks, pigeons, Ibis’ and Egrets.

The next phase of ‘Operation Invasion Dissuasion’ involved an invitation to move the squirrels to another location.  Traps were set out to catch the unwanted diners for later release.  At least three of them were evicted from Harry’s Avian Café by this method.  When rain threatened, Harry had us move the cages beneath the eaves of the house to protect them until the ‘movers’ could collect them and introduce them to their new habitat.  This scheme worked only for a brief period.  I came to doubt its success when as many or more of the squirrels continued to reappear to enjoy the Café’s bill of fare. My question is this:  do squirrels have the same homing instinct as Lassie??  In any event, Harry decided not to pursue further eviction proceedings.  If squirrels could wink, I believe these characters are doing so.

Harry’s Avian Café continues to enjoy its well-earned reputation as the place to be in Parker Lakes.  The birds don’t mind.  They don’t run off the diverse patrons as they dine side by side.  Harry’s blue eyes look on as his guests enjoy his hospitality.  God bless!!

Thanks for stopping by!! Hope to make a few improvements to this blog very soon. Blessings!! Sue, the History Girl